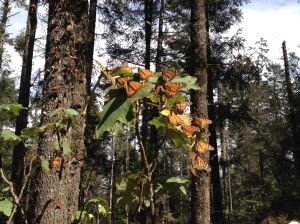 ‘Been there, done that, worn out the T-shirt…’ Karen Cripps, Christmas 2013

Well, that born again optimist was not to be trusted. As I was enjoying reconnecting with my good friends, hope and possibility, the bitch payback rudely showed up, and with her usual charm put an instant stop to the party. Apparently, my body needed some time to recover from its most recent black hole adventure. (Honestly, body, enough!) Much of the festive season was spent in bed, listening to meditations and dozing, whilst the sound of laughter and chatting drifted up the stairs. I dipped into the festivities as and when the energy allowed – to get fed if nothing else (and with two foodies in the house, getting fed was definitely worth the effort). I did my best to fix my face to an appropriately joyous ‘ooh, it’s Christmas’ position as I entered the lounge, not wanting to bring down the mood, but inside struggling to align the two opposing worlds. I desperately wanted to make the most of the odd hour here and there when I wasn’t resting, to soak up the fun, to be part of things, to enjoy company (oh, company, what a rare treat you are) but it was difficult to get all of those feelings in an hour here and there. Mike’s sister had joined us for Christmas and we were staying in a lovely cottage in Shropshire, down a peaceful lane, where the only sounds were wood being chopped, or dogs enjoying their walks, and surrounded by gorgeous open green space. It had all the makings of a wonderfully relaxing break, except for that one vital ingredient: energy.

I managed to speak to all my family on Christmas Day, but it was brief, the energy visibly draining as each new person came to the phone. I made it through the starter and main course of our Christmas lunch, before rest demanded my attention and forced me back upstairs.

It was an almost exact repeat of last Christmas: Groundhog Christmas.

There were a handful of lovely moments over the week: wearing my new pink wellies on a walk through the forest (my husband buys me the best presents), laughing with Mike and his sister, savouring the delicious offerings from the busy and creative kitchen. And I was well looked after, with Mike taking care of everything, and extra special care of me, administering love, hugs and kisses as if they were an essential part of my treatment regime. But it was hard not to wish for slightly less time lying down, slightly less time feeling awful, and slightly more time being Christmassy.

And New Year’s Eve had a similar groundhog theme: I managed to enjoy the delicious meal my ever attentive husband prepared, but I had to have a power nap straight after, which was seemingly sponsored by camomile tea, rather than Red Bull, and gave me just enough power to keep going until 9.30.

The sense of missing out is always more difficult at this time of year. It’s impossible to not feel separate from this social season, watching from the distance as an alternate universe goes about its activities. Ordinarily, I create a bubble for myself, where my world is my normal, where my world is set up for me. Christmas and New Year remind you – loudly – that your world is not normal. They are hard to ignore and are in your face with their socialising and family get-togethers and fun and life. It is always more painful to look directly into the eyes of missing out than it is to shield yourself from it, pretend it’s not out there.

And, I couldn’t help but be reminded this Christmas, that a year had passed since my health deteriorated in such dramatic style. It had never occurred to me that my health would do this. Yes, there have been bumps – many, many, bumps! – along the recovery road, but it was always up and down, never just down. And I always thought I was moving towards recovery. Now, well obviously I still hope that, but I have been at a much lower level than ever before, without any hint of improvement.

It was also, very sadly, the year Lisa Lynch, the writer of my favourite blog, died from cancer at the devastatingly young age of 33.

And, yes, the moments of joy and living were more infrequent than I would have liked (although, it looks deceivingly impressive as a list) they were still there. And, right now, with my health as it is, moments are all I have. I don’t have days when I feel okay. Any days. I just have hours here and there. Or sometimes the ‘good’ hours are just when I don’t feel as unwell, rather than feel well. And maybe that is all I will have this year too.

I won’t lie, I do find my situation incredibly hard, but as much as I sometimes want to stamp my feet and declare the unfairness of it all to the world, I know I don’t have a strong case. What, it’s okay for these things to happen to other people, but not to me? Not to special, wonderful me. There are so many people in worse situations than me, people as equally undeserving, and I never forget that (and, yes, there are many people in better situations, but, obviously, it’s best to pretend those people don’t exist, especially the super healthy, happy and successful people). I know all I can do is make the most of my situation, and make the most of each day. It may not be what I had hoped for in life, but what can you do? Oi, God, I know you’ve got lots on with all the sick children, poverty and war zones, in the world, but can you prioritise my situation, because, well, because I’m me!

So, I am not going into this year with bold plans to make this my best year yet, to get well, to change the world, but to continue to look out for and savour the moments that come my way. To continue to work on recovery, but to live my life as fully as I can every day, however my health is behaving. I know, I know, sounds all very calm and balanced – which is definitely good news for my husband. As I continue in this dip – a particularly bad dip; a dip which means it’s a good day if I don’t smell (and I think it’s probably better if we don’t mention my hair); a dip which means we have cancelled our trip to Norway to see the Northern Lights; a dip which means moments are small, like enjoying fresh coffee, or feeling the fur cover on my feet, or a hug from Mike – I hope I can maintain this sense of calmness and perspective, and trust that more moments are on their way.

I don’t know what’s happened to me, but maybe it’s no bad thing that the driven, goal orientated me is taking a break, as, let’s face it, all she achieved was driving me to relapse in a worn out T-shirt.

Happy New Year, my lovelies, may it be full of wonderful moments.

11 thoughts on “Four Holidays and a Funeral”

Hey, welcome to The Reinvention Tour. Please hang out, make yourself at home, maybe even go crazy and leave a comment - you know, make me look popular. Nice to meet you, by the way. Karen... Xx

I love to read: