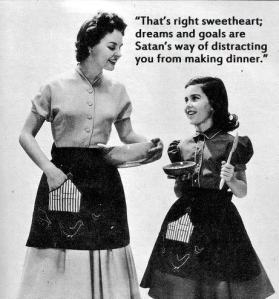 When I was younger I was fiercely independent, both financially and in spirit; I was as career oriented and ambitious as many of my male peers, if not more so; I didn’t ever harbor childhood fantasies of skipping down the aisle in a big white dress; and the maternal gene clearly got lost on its way to me.

But when I met Mike, I developed this irrational desire to be married. I was 33, still had no maternal feelings, but wanted to create a special, permanent bond with this man. Not because I wanted to be looked after, or provided for (although that is exactly how it has worked out!) but because I wanted to have a level of commitment with him that I had never had with other boyfriends; I wanted to mark that how we felt about each other was different.

But the irrational desire to be married didn’t change how I saw the world, how I saw my opportunities as a woman. And Mike certainly had no sexist expectations of a wife (if anything he dreamt about being at home whilst I worked).

Then one day everything changed: not me, not the inside, not my spirit or my values, but my outside world came crashing down. As CFS took over my body, I was physically unable to work and could no longer be the person I wanted to be; I had to learn the art of dependence. I struggled with this immensely at the beginning, it was such an alien concept to me; I was so used to having my own money (a lot of my own money).

And yes my health has improved, but not to the point that I have been able to return to my ‘big’ job. Recently, I have started venturing into freelance writing work, but I am not doing anything significant (yet…!). So essentially for eight years I have been a ‘kept’ woman. It still shocks me that this is where I have ended up.

As a result of my situation, I have ended up taking on many traditional female roles, not because my husband expects this, or because I have suddenly become a muffin making domestic goddess, but because he works long hours and this is what’s fair. But my beliefs haven’t changed: I still believe in a woman’s right to lead her life in any way she sees fit; I certainly don’t believe in traditional roles, I believe in choice. But can I still claim my feminist ideals if I don’t work? If I don’t contribute equally to our finances?

Of course, now that I am older, I understand that the black and white ideals of youth develop into shades of grey, as life complicates itself around those views. In my late twenties, as I stood in my swanky city centre apartment for the first time, proud to have bought it on my own, it never occurred to me that my future choices would be limited by illness.

Most of the time I don’t think about my dependence, or rather lack of independence, because I have learnt to focus on what I can do; and because human beings are adaptable and after eight years I’ve adjusted. I know that sometimes to the outside world I look like a ‘lady of leisure’, or a housewife (these roles are the antithesis of what I ever aspired to be), but I don’t worry about these observations, because I know my truth and how I have ended up here.

But when I stop to think about it (which I don’t allow myself to do very often, but I am reading a book with a strong feminist character at the moment, which is taking my mind down this road) I do feel a huge sense of loss for all that wasted potential in those difficult CFS years. And that sense of loss is eased by writing and working on taking that forward, but unless in the future I can find a way to be successful with it, I will be in danger of becoming a housewife with a hobby, a long way from my independent past.

As a young feminist I didn’t understand that not everything would always be in my control – with my ambitious career goals, I thought hard work was the only strategy I needed. As it turns out, I was completely wrong. But I was also wrong about dependence: it is not my enemy, or the awful thing I thought it would be. I am not made to feel less of a person by my husband because I no longer have a career, he does not use financial power to control me, it’s just how life worked out for us. And I have experienced the type of love and trust with a man I never thought I would experience; a type I don’t think I knew existed. How can I feel angry about that? I will never forget how lucky I am to have someone who supports me in this way.

And despite everything that has happened, I am still me, I still despise domestic life and cringe at the thought of being a housewife, I still aspire to be successful – it’s just not been as simple as the young me thought it would be. But when the time is right, the young feminist inside me is ready to come back out…

Leave a Reply to The Reinvention Tour Cancel reply

Hey, welcome to The Reinvention Tour. Please hang out, make yourself at home, maybe even go crazy and leave a comment - you know, make me look popular. Nice to meet you, by the way. Karen... Xx

I love to read: